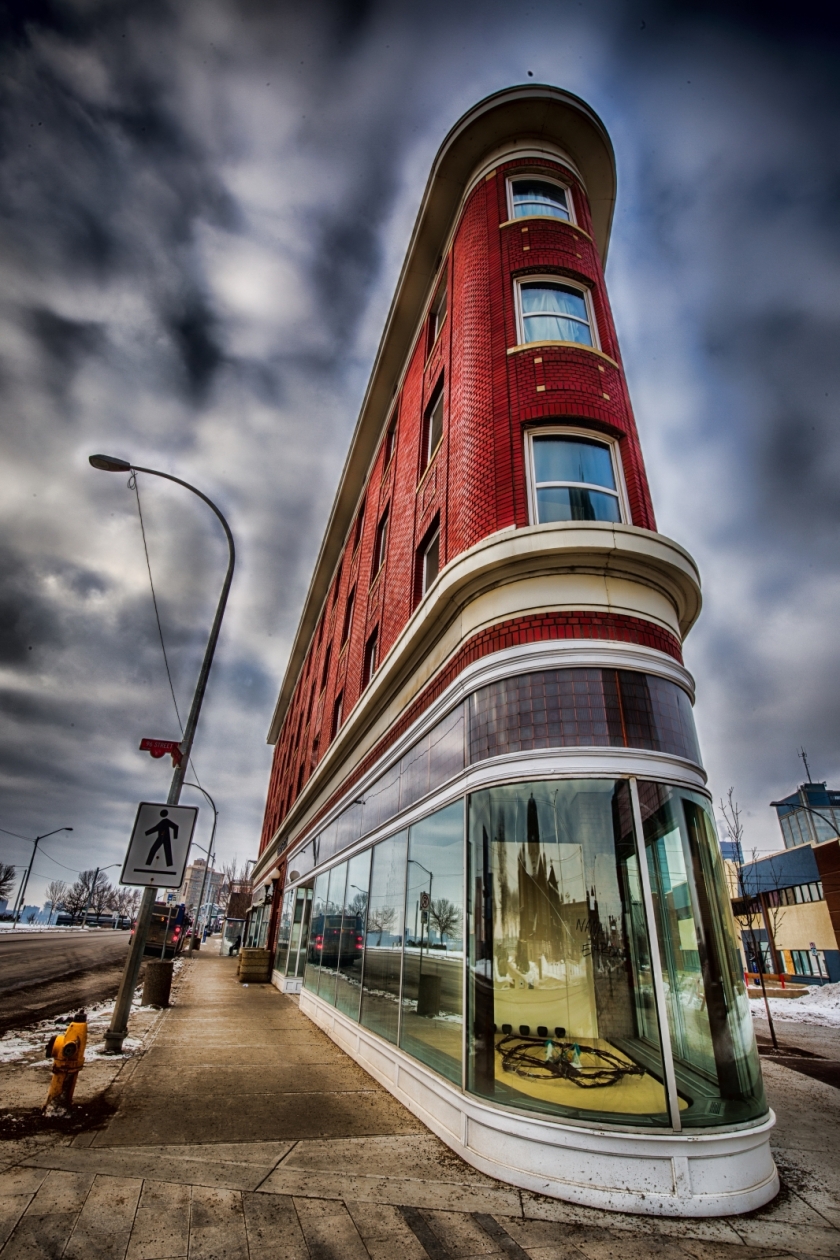 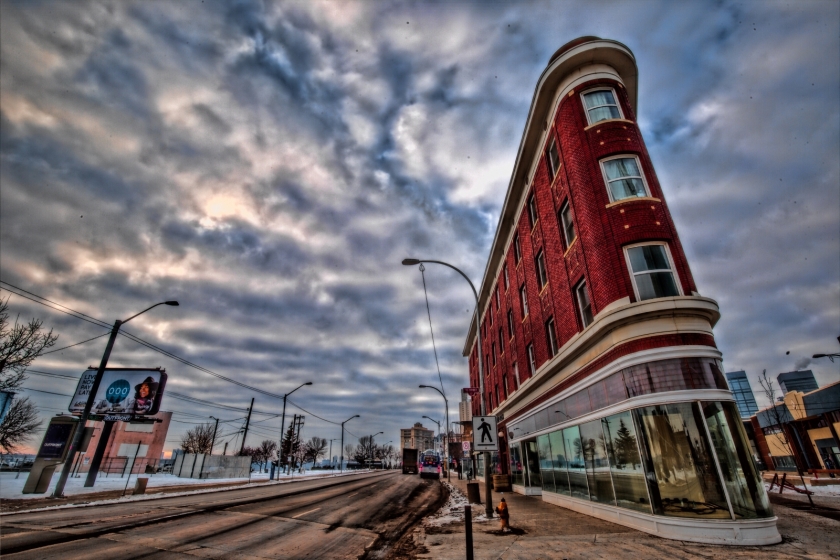 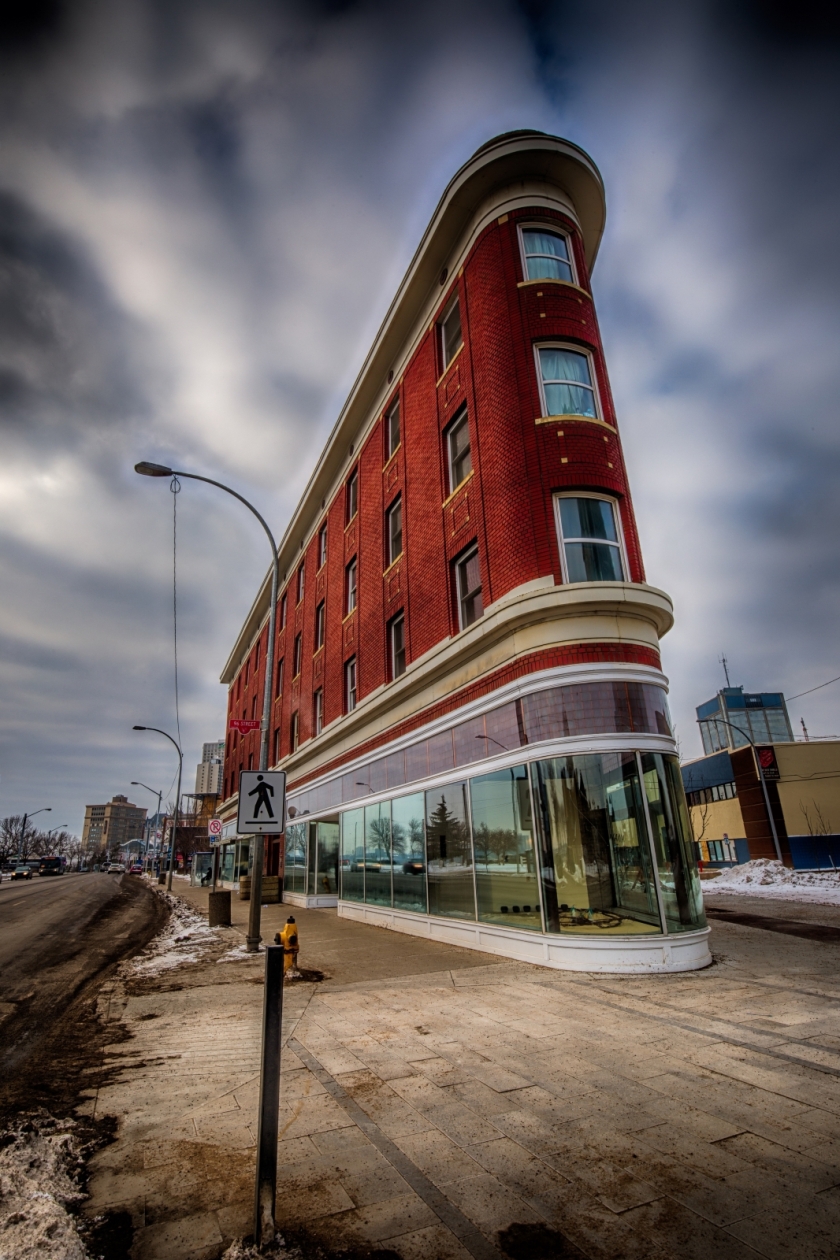 This building is likely the only building in Edmonton in the Flatiron architectural style – triangular in shape with curved windows at its toe. One would find this building in the twentieth century and it would reflect Edmonton opulence. The Gibson Block building, built in 1913, precedes many things. It precedes Canada’s involvement in World War I. It precedes the roaring twenties. It precedes the era of Al Capone, the American prohibition and a Canadian connection. It precedes the Great Depression. The Gibson Block building associates Edmonton to being Metropolitan. One would find a similar building in Montreal, Toronto or Vancouver. Its Canadian, older metropolitan style works well as possible landscape to Morley Callaghan’s novel ‘Such is My Beloved.’ One can imagine the Great Depression and the lives of Father Dowling, Ronnie and Midge intersecting in such a building, a building with ground level retail space, apartments upstairs and Turkish baths below. Neglected, the Gibson Block building faced possible destruction in the 1990’s. The Edmonton City Centre Church Corporation recognized possibility and repurposed the building. The Gibson Block building is now home to the Women’s Emergency Accommodation Centre and provides refuge to those in need – homeless and transient women. At Christmas, the building’s curved glass toe held a huge dreamcatcher, one, in size, able to encompass a person.

Listening to – Bruce Springsteen’s ‘One Step Up’ and ‘If I Should Fall Behind,’ The Black Crowes’ ‘Twice as Hard,’ Neil Young’s ‘The Needle and the Damage Done,’ Alison Krauss’ ‘Lay My Burden Down,’ Hank Williams’ ‘My Heart Would Know,’ Willie Nelson’s version of Coldplay’s ‘Scientist,’ Lucinda Williams’ ‘East Side of Town,’ Shawn Colvin’s ‘All Fall Down,’ Peter Himmelman’s ‘Impermanent Things’ and Ryan Adams’ ‘Chains of Love.’

Quote to Consider – “To me, photography is an art of observation. It’s about finding something interesting in an ordinary place … I’ve found it has little to do with the things you see and everything to do with the way you see them.” – Elliott Erwitt

Burning It Down – Seeing It Through