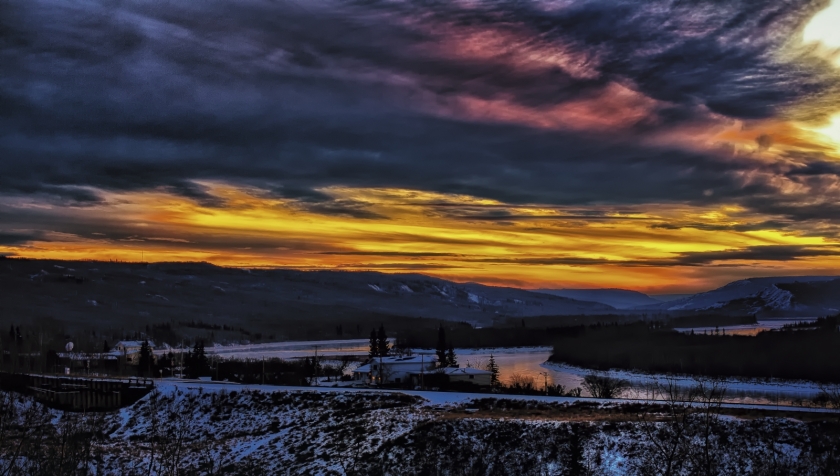 For a second time, a Peace River, Alberta sunset arrests my attention. This photo is an image exposed incorrectly, but one that has been shot as a RAW file; editing is able to rescue the image returning it to Life and intention – a sunset shot. Earlier this fall on a day when we (my family and me) had been to Peace River for a day’s outing, the day’s return journey began at sunset; we in our vehicle making the long five kilometre climb westward out of the Peace valley and enjoying an array, scatter and stir of cloud work – hues deepening, then diminishing. A sight to have caught as a photo, this sunset … but just as easily enjoyed by each of us for what it was; there will be other sunsets (we do live in Alberta). As an entity, the immediate follow-up to sunset is dusk, light that softens as it leaves, light that colours as it diminishes – in photographic terms it de-saturates (withdraws colour). As an entity, dusk is intermediary between the stark, factual reality of daylight and that part of Life that occurs in the unseen. As an entity, dusk seems to be a visual reminder of transience – at sunrise dusk is a part of how we enter the day; at sunset dusk moves us from our day into night. The day’s movement is a part of our forward Life movement reminding us of our impermanence.

Quote to Inspire – “It’s not how a photographer looks at the world that is important. It’s their intimate relationship with it.” – Antoine D’Agata

From school I drove home on streets that are slick, polished ice. They are not quite treacherous, only difficult to begin moving on in a half-ton truck without weight in the box.

So … Christmas lights – I arrived early and had good post-dusk light.  The homeowner did have the Christmas lights on already and clouds feathered against a silver blue sky as background.  I framed the shots taken to include more sky but ended up cropping to balance things out in the images. In terms of setting, I had the white balance set to Tungsten and the blue derived from the sky was more tending to a dark turquoise than royal blue.

The matter of having a reflective surface in the foreground is really the idea that reflection of lights within a foreground surface should artfully double or duplicate the subject photographed doubling the number, size and shape of the Christmas lights. As I thought this through the hood of a vehicle was my first conceptualization of this technique; but, Kyle Thomas www.kylewith.com has demonstrated that the side of a vehicle can be used artfully to bounce or reflect different subjects … the side of a clean, glossy vehicle should serve to reflect among other things … Christmas lights. The snow does reflect light, but it does so more in an atmospheric glow of the dominant colour among the Christmas lights.

I did use a tripod to steady my 60D.  But, using the tripod is forcing me to think through composition because manoeuvrability of the camera on top of a tripod has some limitations; usually I see and understand the composition as I move toward it and find it. The movement of the camera to the best composition on top of a tripod is more mechanistic and I suppose I have not only to think through the lens but through the tripod structure and its movement, as well. I’ve been using the live view display with the pistol grip to position the camera in terms of composition; then I’ve been using manual focus with the plus ( + ) settings within live view to focus accurately upon the subject.

Tonight, I worked with an ISO of 100 and f-stops between 8 and 11. The duration of the exposures is anywhere from 8 seconds to 30 seconds. I did shoot once every minute or so and can track the sky’s darkening through the pictures. I took fifteen shots tonight, three of which I include here. Point of Consideration – in these town shots the mix of Christmas lights and ambient light combines with street lights that light the roadway, the yard and the house. The effect of Christmas lights against ambient light should be more striking if street lights are excluded; I may need to find a farm in the vicinity that has used Christmas lights well and on their own, away from powerful farm lights.

Other thoughts – I am taking public shots of Christmas lights around town; watching someone photograph your home and its lights must be a bit awkward if it’s not happened before.  Maybe I’ll present a photo of the sight to the homeowner as a positive, goodwill gesture.

The shot I like is the one with grey skies; my daughter and wife like the other two.